I really hope my colleague David Waggoner is wrong but so far his Elliott Wave mapping of the stock market has been spot on. Here is an excerpt from his current report sent to his subscribers at The Market Detective. 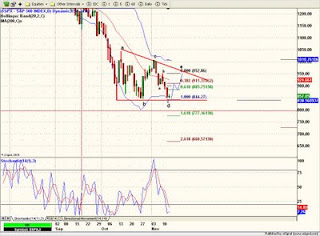 What I hope you can see, and you might need to click on the chart to blow it up to a more readable size, is a Wave 4 triangle in a bear market trend. Holy #$%^ Michael, speak English.

Elliott Wave theory says that primary trends move in 5 waves. A corrective trend moves in 3 waves. The primary trend now is down so there should be 5 of them - three down and two corrective. I am not going to get into an argument over whether the current bear is a 3-wave of 5-wave affair but Elliotticians say that in either case a corrective wave against the trend comes between two waves in the direction of the trend.

The pattern seen in the chart is a triangle pattern and accordingly that would be a correction in an ongoing bear market. In other words, there is more downside ahead.

Fortunately, this analysis give us one more little rally before the day of reckoning.

Do I believe this? I won't say here or my subscribers would have a cow. But if this pattern does break down it would not be a good thing.
Posted by Michael Kahn at 10:21 AM

As a subscriber, I won't give away the opinions expressed in your newsletter. Reflecting on opinions expressed in previous editions, does today's action change you mind at all? If patterns are truely fractal, the price action of the first wave from Oct '07 to March 08 should have suggested the October '08 low would get taken out in a 5th wave down.

Hi Mike, you said at the end: "But if this pattern does break down it would not be a good thing." Did the pattern break today? Are we going to get a leg down tomorrow? Thank!

I know you wrote your comment when the market looked rather lousy so let me say that the fractal nature of the waves means that each wave subdivides and then subdivides again - all with Elliott Structure.

Do you mean instead that wave 1,3 and 5 need to be in proportion? The answer is a resounding yes and that is where fibonacci comes in.

And now to answer the question:

Waggoner has revised his view that the current action is not a 4th wave triangle but a 5th wave ending diagonal. That means a lower low is coming but not a new leg down.

Don't you just love Elliott? No wonder it is taboo in many technical circles.

The pattern did not break down. It was a false breakdown, at least so far, and that actually is bullish.

But in this market, giant grains of salt for everyone!

After today's action that is now canceled. If we break today's lows I'm gone. There has been a lot of great action around the lows since Oct 10th. A break now and I'll stand aside liquidating what I'm scaling into around here. This area is the Alamo and I ain't Davey Crockett.