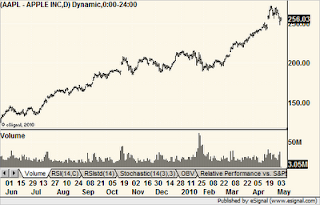 In Monday's column, I got some of Dan Zanger's views on the market and he gave me some examples of stocks that had blow-off tops. This was one of the reasons he became bearish, looking for a 10% correction. I could not run the charts in Barron's Online so here they are. 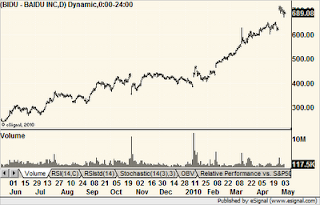 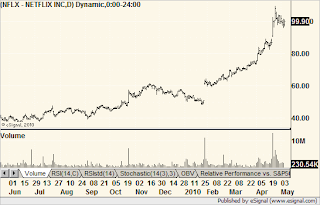 The idea was that they were already top performers so people expected good news. Then they bought in a frenzy on good earnings, which were already baked into the price, creating a buying climax.
Posted by Michael Kahn at 9:47 AM

I use an Average True Range based trend line to identify dominant trends, then try to be on the same side, either Long or Short.

For AAPL, it's now is Sell mode, while BIDU and NFLX are flirting with following AAPL from Long to Short, but neither is quite there yet.

SPX 1094 in one day. Nice call. I was researching the EW_ international symbols. Lots of negative divergences and lower lows on weekly charts. Now, today, the market breaks. Whatever the reason they come up with, the market broke-fat fingers, buy vs. sell order error, or not.

Lots of controversy about what happened from broken machines to one stock trading at 1 penny to a billion dollar instead of million dollar order.