And any fool knows
a dog needs a home,
a shelter
from pigs on the wing.
- Pigs on the Wing (part 2), Pink Floyd

"When pigs fly" is an idioms used to indicate that something is highly unlikely ever to happen, or that it will never happen. This phrase is thought to come from an old Scottish proverb (source: omniglot.com). Either the messiah is pulling into the station with Godot or Satan just beat the Russian hockey team at home because the stock markets of the PIIGS countries are indeed flying. 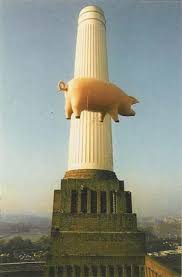