Energy Up, Financials Down

The big trade for the past few years was buying energy and shorting financials. As I wrote last week in Barron's Online, that relationship got way out of whack and snapped back violently to something more "normal." 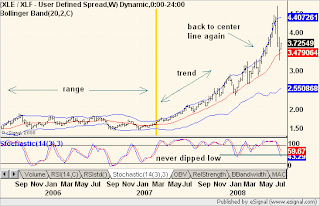 With oil at a floor of sorts and financials responded to bad news again, it seems as if the trend here is back. But rather than think the old trade is going to work the way it did before, which it never does, let's just say that the fun in financials is over and it is time to make a little money in energy again. How much? Not that much as this is still a bear market. But on a relative basis energy seems to be back on top of financials.

The chart shows two distinct phases - range and trend. In the range, stochastics goes way up and way down, as you'd expect for a trading range type of oscillator. But in a trend, and don't forget we are talking about the trend in the ratio of two ETFs, stochastics only dips down to the middle of its own range.

Watch to see if the center line of the Bollinger Bands in the chart is violated and stochastics dips to the nether regions again. That will be the signal to reverse the trade and go long financials and short energy.

I suspect it will happen at the end of the bear market.
Posted by Michael Kahn at 8:08 AM

Now that is something I can believe!

Didn't tradedog ask you to buzz off?

How about some real comments? What do you all think of the oil market? I still say it is correcting, not reversing. If you caught me on Nightly Business Report this evening I talked briefly about TTES, which is oil services and it rallied today as oil dipped. That is a positive sign.

I agree. The comments got a little wierd. Yesterday and this morning's market action was a bit of a surprise (just a head fake?). I didn't think there would be much to this bear bounce than a common 5+% rally. And I thought oil would show some counter trend trading. So much for predicting the market.

The XLE / XLF ratio did not move back above the 20-day expo.

But oil stocks are acting way too well for oil to be heading lower. The entire services complex soared Wednesday and my pick in Monday's newsletter and Tuesday's Nightly Business Report interview - T-3 Energy (TTES) - is up for the 5th day in a row (intraday) multiple percents per day.