The offense/defense ratio I put up shows the short-term rising trend hitting the long-term declining trend either now or very soon, depending on how strict you are with the trendline construction. That suggests that the bounce rally's days are numbered.

But it also leaves the door open for a breakout through the long-term trendline. I can't see that happening unless still more technical beliefs must be set aside until the market is finally stable again.

Check out this chart of the old Morgan Stanley consumer and cyclical indices (they make me say the unpalatable "indexes" in all my DJ work). 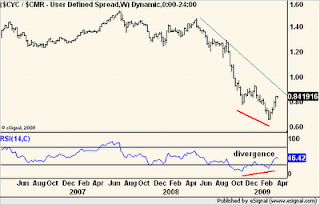 What I see is the same sort of short-term term saint meets long-term devil. But unlike the index in the Barron's Online column, this ratio set a lower low last month. I have no real conclusions but there is one more thing to note - a big old textbook bullish RSI divergence.

It's almost as if this chart is saying that the cyclical stuff will break out relative to the consumer stuff. The problem is when we look back in time. 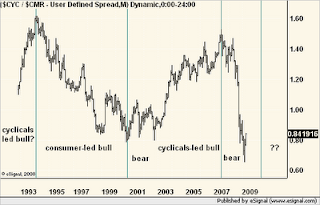 Now we can see that the consumer stuff beat the cyclical stuff during the 1994-2000 rally. So what gives? Is this not a sign that the bear market rally has legs?

Well, how about this? EVERYONE (caps intended) says the economy was consumer driven all this time. There was a respite in 2002 as the last bear market healed but then the cyclicals drove the market during the last bull run.

And now it looks like it could, repeat could be happening again. Don't forget this is not the offense/defense stuff as the other index was. This is consumer stocks vs. industrial cyclicals. It just might pay to look at cyclicals leading the next bull and not the consumer stuff.
Posted by Michael Kahn at 6:19 PM

On the one hand looks like everyone is fed up already with that bear market, on the other hand it will be sort of irrational to get in right now... bummer...