The market thumbed its nose at the housing data this morning but the real fun happened after the Fed said it was ready to do more to get the economy moving.  How buying bonds creates jobs is above my little technical analysis keppie but bulls, or was it fools, rushed in. I looked at a chart of the Dow intraday and it looked spooky - as in ready to haunt the greedy.

Was it an ingenious bit of financial engineering by Goldman and pals (yeah, I said it) to suck in retail so they could get out? After all, everyone say the resistance breakout in the market yesterday and even I had to relinquish the growling.

But the more this continues, and there is little outside of common sense that says it won't, the hard the fall will be, I am convinced. 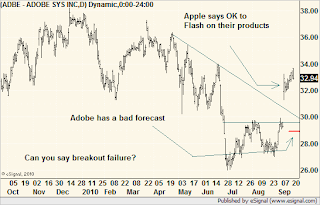 Adobe got slammed after hours for a weak forecast even though earnings were good. And only a few weeks ago it was sent to the moon with good news. The falling part was vicious and not very bull market like.

Mikey still likes gold and now silver. Awesome upside reversals in both (intraday) after the Fed basically admitted they have to do dumb things rather than do nothing.
Posted by Michael Kahn at 4:50 PM