A glass of whine

My lack of blogging in recent days has a little to do with the kids being off from school and a lot to do with the markets being more like school than places of business. I admit that the following is a brain dump so read at risk of wasting your time.

As you may have guessed from Facebook posts and other communication I think that the whole system of trading and investing has turned into a farce. Either you are the cool kid or you are the nerd getting a giant wedgie.  (In case that was too weird, I mean Goldman Sachs, Morgan Stanley, JP Morgan, Hedge Funds, HFTs, etc as the jocks and everyone else on the outside as the nerds) Did you finally catch the fever and buy silver last week? Or Netflix on the technical breakout Thursday?

"They" are selling you the path to riches with an BBM-ing baby and a guy tooling around town in a helicopter. Talk to Chuck! He'll help you trade, I mean invest. After all, we need advanced trading tools to buy mutual funds and a few round lots for our 401Ks. Retail stock trading jumped the shark two years ago (maybe four) and now investing has followed. It is not a casino. It the Roman Coliseum and we are not the lions.

Yeah, I am a little whiny today. And yeah, I am still stinging from last week's post S&P warning column - which was written as usual in the morning and posted on the site after the close - leaving me exposed to whatever happens in the afternoon.  I did not see Apple reverse to the upside before it was too late.

The funny thing is that I still see a major correction coming. There is too much kindling soaked in nitro to ignore and as each day goes by I have less confidence in the leaders - both sides of the aisle and anyone straddling it. It takes all my energy not to get political here but the speculator thing was just too much. Just who are the speculators, anyway? Was that ever answered? Is it me and my one crude oil contract? Or my 500 shares of GLD? Or the University of Texas taking delivery of billion in gold bars?  Evil educators!

Charles Payne had a gem of a post the other day - Mr. Obama saying, "there is enough oil out there for world demand" is an admission we don't need an alternative for supply reasons.  Don't get me wrong, I want to put solar panels on my roof and would support a wind farm off shore (and hydro in the East Rivier) but this is nuts. There may be enough oil for world demand but we are paying someone else for it. That's why oil prices are higher - we are afraid supplies will be cut off, not that they are too low.
Posted by Michael Kahn at 9:50 AM 4 comments:

Rant time - Those evil speculators! How dare they run up the price of ouil!

Did evil stock market speculators drive up the price of the Dow?  Nobody is going there, are they? Its the economy, they say. Free market good!

Yes, this hurts people in the pocketbook and I am not exempt. But clamping down on futures trading is not the answer. Energy users - such as transportation companies, power generation companies, heavy manufacturing companies - use the futures market for its intended purpose - to control risk. Who do you think these commercial interests lay the risk on? Why, the speculators, who expect to be paid for taking this risk.
Posted by Michael Kahn at 9:44 AM 1 comment:

An idiot with a word processor

The comments are coming in fast and furious online thankfully letting me know what an idiot I am for being bearish. Stocks soared today so let's just ignore this chart, OK? 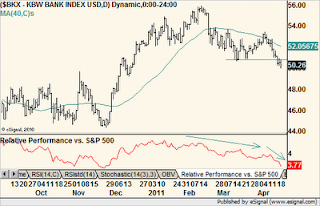 Just getting tired of everyone, including women, talking about cajones.  But finally, S&P grew a pair and said what needed to be said. Now will Washington reciprocate and do what is needed?

Here comes a rant. If you think we are on the right track, you can skip the rest and come back to the blog tomorrow.

Timmy Geithner is now making the rounds on financial TV to make the case that S&P is wrong. I tuned in and really listened to his message but unfortunately - and as usual it - was long on "ought to" and short on "here's how." I turned it off after a few minutes.

Bill Gross was right for getting out of Treasuries. Why does the Talking Heads tune "Road to Nowhere" keep popping into my head? Oh yeah, that's where we are. Check out these lyrics:

Sorry Timmy and Benny and Barry, time is running out. Is it amazing hat this band is called "talking heads?" Wow!

This week, I suddenly became a fan of bottom up investing after decades of affinity for the top down approach. For starters, traditional technical analysis has been tricky to apply in the age of socialism, er, government intervention. And I say this a member of neither political party because they are all totally off their rockers in DC. I am also a new fan of term limits - as in one term - for everyone in Congress but I am getting way off the topic.

So why my change in view? Over the weekend, as I was preparing Monday's Quick Takes Pro with my staff I noticed that many economically sensitive stocks - the cyclicals - were sitting in precarious positions. Even superstars such as CAT and DE sported bearish RSI divergences so something seemed amiss. Forget that AA sported a possible breakout failure with technical divergences before earnings.

So-so stocks, such as steel, were sitting on important support. Did you see X break down?

And heaven help the weakest in the bunch such as autos and auto parts. We ran a chart yesterday of MGA, an auto parts maker, that cratered in February and continued to bleed money through last week. It broke down again on Monday and is getting clocked again today.  Does GM stand for "good money" that investors threw after bad?

If the economy is on such a nice, but slow, path to recovery then this overall weakness in economically sensitive stocks cannot be good. Tech is weak. Banks are weak. And despite the current correction in oil, it is in a bull trend that is not over.

Bottoms up! And for many of us, that means a pint or three at the end of the work day because it will be needed.
Posted by Michael Kahn at 10:15 AM No comments:

Here is some text left out of the final version of my Barron's Online story today:
In the corporate bond market, the charts a little different. During the financial crisis in 2008, investors flocked to the safety of Treasuries causing yields to tumble as prices soared. In contrast, yields of corporate bonds moved higher as their prices moved lower.
But since last summer, iShares iBoxx $ InvesTop Investment Grade Corp. Bond Fund (LQD) has held up better than its Treasury bond counterpart. After easing lower from September through December of last year, the corporate bond proxy settled into a trading range (see Chart 3).
I'll leave full analysis of the fundamentals to others but with profits improving and reports of hoards of cash stuffing corporate coffers, it does make sense that their bonds would look better. However, while corporate bonds are usually traded according to their presumed safety vs. Treasuries, they also depend on the overall level of interest rates. If Treasuries yields break out to the upside, then corporate yields could move higher with them.
For the corporate bond prices and the iShares exchange traded fund, that means lower prices. And if it moves below the bottom of the trading range at 106.75, the next support does not come into view until 103.35. This would wipe out all of its 2010 gains.
Posted by Michael Kahn at 4:26 PM No comments: 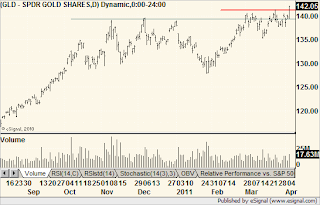 As I wrote in Quick Takes Pro (shameless marketing opp) a few days ago, I have never seen a quadruple or more top. This pattern in the gold ETF is either a sextuple top, which does not exist, or a rectangle or even a rectangle with handle. Gold to 1550 next.
Posted by Michael Kahn at 4:04 PM 2 comments: 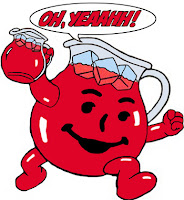 Livestock confirmed a long-term breakout. Corn was limit up twice last week (or close enough Friday). Oil at 108 and gasoline jumping by a full nickel over the weekend don't matter to the stock market - until they do.
Posted by Michael Kahn at 3:08 PM No comments: