I originally wrote this in August 1998 when I covered technical analysis for BridgeNews to explain what a big stock bull saw in the charts to suddenly turn him bearish. The names have NOT been changed because the call turned out to be pretty darn good.

What did that mean?

Why a big bull turned into a big bear

This week, mega-stock bull Ralph Acampora, chief technician for Prudential Securities, did something that most people on the Street thought would never happen. He issued a sell signal. Shudders went though the masses. If this guy, who was famous for predicting Dow 7000 when the Dow was 1000s of points away and who clung to his Dow 10,000 forecast for 1998 before last week's fireworks, can turn sour on stocks, what will the itchy trigger fingers of the masses do?

Let's examine what really happened from a charting standpoint. First, Acampora follows trends and patterns in stock market prices. This makes him different from that other mega-stock bull Abby Joseph Cohen, chief market strategist for Goldman Sachs, who leans more heavily on fundamental analysis. We're not going to say here which is better nor who is right. As a column that attempts to debunk the mystery associated with the Acampora side, technical analysis, we'll just focus on what Ralph saw.

There are basically two keys to his new bearish stance -- market breadth and market trends. The former measures how many stocks are going up and how many are going down. It measures how much of each day's volume is attributable to each of these two groups. In other words, is the rising tide carrying most of the boats higher? If it's not, too many of the boats have sprung leaks.

The answer is that none of them on their own fit the bill. Perhaps an unweighted index, such as the Value Line Index, which gives its approximately 1800 components an equal voice, is the answer. If it is, we've been in a bear market since April.

Acampora, as well as a whole host of technicians, saw that market breadth had deteriorated badly. More stocks were going down than up. More volume was attributable to declining issues that to rising issues. More stocks were setting new 52-week lows than 52-week highs. More S&P industry groups were lagging the S&P 500 than were leading it. This is curious in that we would expect the number above to equal the number below. The industry groups together are the S&P 500.

Again, Acampora was not alone in noticing that the small stocks were going down while the big stocks were going up. Stocks with Asian exposure, such as the technology sector, were sliding since the Asian stock meltdown last autumn. True, the tech heavy NASDAQ Composite was climbing but when we examine it more closely, we see that only four stocks account for nearly half of the index's movement. That's not the market, for sure.

The 299 point sell-off we had last week was underway well before Ralph said a word. No, comments from somebody famous did not help matters but the bottom line is that the stock market was already on shaky ground.

Let's now look into Acampora's new downside target -- 7400. This is 1200 points away from where we are today. First, the jargon. If a correction is defined as a 10% drop, we've already had one. A bear market takes us to a 20% drop so that's where Ralph gets his wording.

Second, how did he get his 7400 number? You can bet he didn't just pull it out of his hat. The Dow 7500 level was the arguable bottom of the July 1997 - January 1998 trading range. It served as the starting point for the rally that broke free from the range and lies at one of the key percentages to which markets often fall back during declines. For those of you so inclined, it is the 38.2% Fibonacci retracement of the rally that began in late 1994.

We cannot know today whether we will see 7400. More conservative technicians will wait to see if shorter-term technical levels are violated before moving into the bearish camp. However, the moral here is that we need to question our indicators, including our definition of the market or what our advisors are saying. Market breadth and small stocks were flashing warnings a long time before the Dow got smacked.

Acampora still looks for the magic Dow 10,000 in a few months. For long-term investors, he does not sound like such as bear after all.
Posted by Michael Kahn at 4:19 PM 1 comment: 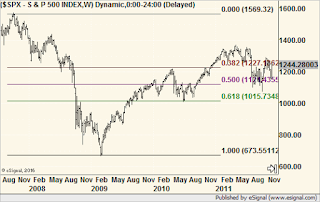 Use fibos on your charts but please use other things along with them. They can help you frame the market but like a hammer, you will have to decide where to put the door and windows. Fibos do not dictate where you buy and sell.
Posted by Michael Kahn at 1:56 PM No comments: