It's been a wild and crazy year, hasn't it? Of course, we can say that about every year. True, some events this year were rather horrific but overall my view is that this was a year marked by inflammation.

Inflammation? Taking a page from a late night infomercial, it does seem that we were all mostly irritated this year from the news. Washington was a mess. Fiscal cliff, dairy cliff, ports cliff, election cliff, Supreme Court and ObamaCare, Fox vs MSNBC, here a pain, there a pain, everywhere a pain, pain....

But let me bring this back to the reason anyone actually reads my posts and social media stuff - the markets. This was a year where good news was good and bad news was good because it would prompt the Fed to print more money. And oh how it printed! And Super Mario in Europe could not stand in the shadows as Ben "Chubby Checker" Bernanke twisted the night away. Stocks love free money and rallied. Funny how most of this printing took place just when technical breakdowns were imminent.

But then Jackie Paper grew up and Ben the Magic Dragon's last bellow in September marked the top in the market. Stimulus tipped over its point of diminishing returns as investors finally got wise.

Where do we stand now? Will technical analysis ever work again? Who shot JR?

It seems that with the market's awakening to the meddling, charts seem to work better. But they are still not perfect and one reason is that so many people are using them that many try to game the system. They look for triggers that will sway the crowd and they act the other way when it is shown the crowd is wrong. False chart breakouts. Moving average cross whipsaws. Stuff like that.

I don't think charts will ever work the way they used to work although I still find great value in them. If you understand that the observation of an event actually changes that event then you can act accordingly.

For you physics haters, it is called "Heisenberg Uncertainty Principle" and it concerns measuring events on the atomic level. If you think about how we might measure something by looking at it and then realize that in order to look at something we need light and light particles interact with atomic particles so by shining the light we affect the event.

Let me digress. My 10th grade chemistry teacher told us that we could measure the speed of a horse on a racetrack by shooting marshmallows at it and see how the marshmallows were affected. The horse may say, "hey cut it out" but his speed would be essentially unaffected.

However, if you use bullets to try the same thing you affect the horse's speed all the way.

Clumsily bringing this back to charts, the more people that look at them the more they act on them and the less the charts measure the psychology of the market. They measure the actions of the observers and then become rather useless.

I still believe that charts work but again, not they way they used to work. Individual stock analysis, save for the handful everybody and their brother analyzes, works better than major index analysis. This year, try doing some bottom up analysis - the 500 stocks of the S&P 500 - to formulate an opinion instead of looking at the machinations of the S&P 500 itself. Try using more sentiment analysis. Look into the harder analysis such as cycles instead of trendlines.

Good luck to all in the coming year. Thanks for reading my tirades, digressions and sarcasm. I hope my incessant pop culture references gave you an occasional chuckle.
Posted by Michael Kahn at 1:58 PM 1 comment:

I suppose I am pundit-y enough to have a blog post on the fiscal cliff. You will have to forgive me for not having any posts at all for a while but this country (and world) are messed up right now. The ink was barely dry on news of a mall shooting then we get a school shooting. I am still donating to the Hurricane Sandy relief fund so evil/devil/Satan, can we get a moment to breathe, please?

And in the background, the fiscal cliff. I say background because it's only money. Keep that in perspective.

Politicians are ill-equipped to really fix things because in the short-term they will not get re-elected and their donations will dry up. We need the free market to fix this and that means letting it flush this mess down the pipe once and for all.

Will it hurt real people? You bet it will. But they are being killed by a thousand cuts already from zero return on savings to getting taxed on taking a #@$% to being regulated to death.


What do they have on the table? Slowing down the growth of government, not shrinking it. This will not fix things so please bring on the invisible hand. No, not of god but of the free market. Not familiar with that term?


Here's your definition: A metaphor conceived by Adam Smith to describe the self-regulating behavior of the marketplace.

The economy right now is like a stuffed up colon. Clogged and in need of a good financial enema. Please politicians, stop trying to treat it with aspirin to block out the pain. Pain is there for a reason.

The working title for today's Barron's Online column was "Reanimated Tech Stocks for Christmas." It was about how several tech stock that were left for dead have been resurrected and may be good opportunities. You'll have to read the column to see what they were. Can't give away the store otherwise Rupert would have no need to pay me.

There is one stock I did not include in the list, mostly because we have editor-imposed space limits.Yes, theoretically the online limit is whatever I can write but realistically nobody is going to wade through a 3000 word piece.

What stock? Well, if you read the title of this post you know. The betamax of search engines, Yahoo, is on the mend. Remember those campy commercials with the eskimo family ordering a hot tub? or the Eastern European dating service with the monkey and the toucan? Yahoooooo-oooo! Yes, fun but we all now google and bing stuff, don't we.

Anyway, check out this weekly chart. 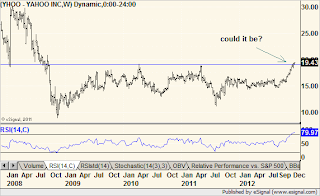 Yahoo is now at the top of a long base, if not slightly through it. I think that it needs a little rest here as momentum driven rallies do tend to fail. Just look at the last two tries above. But overall not too shabby.

And now look at weekly RSI. A quote:


"The most bullish thing a stock can do is get overbought and stay that way."
- Alan Shaw, CMT (former TA boss at Smith Barney)