While I am certainly impacted by Hurricane Franken-Sandy it is certainly not to the extent of those near the shorelines. We had very little rain on Long Island and since I live miles from the coast there was no flooding at all. Wind damage is another thing and monster trees are down everywhere, including on the electric and phone lines from the street to my house.

But with a box full of batteries, three cars topped with gasoline and two propane tanks for the barbeque we actually doing pretty well on the energy front. The laptop gets charged at a friend's house where there is electricity and a desk where I will write my column later today.

Time to think about the modern world. Look how dependent we are on "the system" that brings us an abundance of food, power, entertainment and other supplies. For those of us who ever rode out a few days of blackout, our stashes lasted just fine. But I have been thinking of the power company's warning that we'll be out 7-10 days. At some point, laptops, cell phones, battery supplies and gasoline for generators will run out. Then what? You can't just run down to the corner to fill up as their power is out, too. And for a while, Long Island was actually fully cut off from the world as bridges, tunnels, airports and shipping were all shut down. Stop and Shop is not getting a truckload of milk and bread so fast.

I am not advocating becoming a doomsday prepper but if, (insert deity of choice) forbid, our modern supply chain is cut off for say a month it is not like we can go out into the woods and hunt some Kobe beef. Or drop a line and pull up some Chilean sea bass. Or harvest some baby arugula.  Not here on Long Island in November in the shadow of New York City.

Just a thought. We are not as in control as we think.

With that, I must say that this is the most luxurious camping trip I have ever taken. We have a full grill, king size beds, waterproof roof and wind proof walls, internet (granted, stolen from the neighbor's unprotected WiFi) and a pantry full of canned goods. And I have learned to listen to the radio for entertainment.

Of course, this is all stored food and energy and eventually it will run out. But while it lasts things are really not so bad (again, my house is standing so we have it good compared to others).

I run a daily chart-oriented newsletter and as I was preparing for this morning's missive the Dow was of triple digits in the premarket. I thought back to a customer who called to cancel his subscription just yesterday. His comments were not that unusual as he said (paraphrased) I like the service but it is a bit short-term for me.

Now, I do not run a day trading service but the average recommendation is probably on the order of three weeks. It's not intentional but with the absence of a secular bull market you have to take profits when you can and cut losses a lot sooner than you might do otherwise. It leads to plenty of whipsaws.

On my screen was a chart of the "market" and I thought to myself, "How can any investment advisor be in this business now when the average stock is trading where it was a month ago, six months ago, 18 months ago and four years ago? How about six years ago? 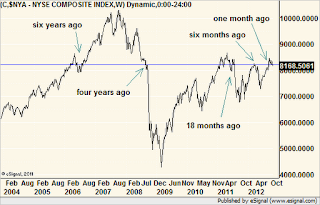 This is the NYSE composite.

We've all read about the lost decade for stocks and now here we are a few years later than that and the S&P 500 is still no better than it was in 2000. It managed to climb back in 2007 before falling to and even lower low than it saw in 2002. And today in 2012, even without today rout, the index is below both of those previous peaks.

For professionals and astute active individuals, there were some monster money-making trends to follow over the years. When I say money-making, I mean in spades. But you have to be willing to sell when things look great and buy when things look terrible. And you have to know when the minor trend is changing to sidestep problems or be sure to buy even more at the right time.

Buy and hold may be dead (for now) but advisors cannot risk calls from clients when the market moves down 10% with them in it or moves up 10% with them not in it. Traders had plenty of opportunity. Investors were left out in the cold.

OK, here it comes. Managers will come back to me to say they made plenty.

Well, good for you. How did you do it?

We saw the valuations in 2009 and bought.

Great! How is your 10-year track record?

You did? Bully for you. So did drinking beer and collecting the deposits on the cans and bottles.

Sorry to be snarky but unless someone trounced the market they only outperformed a mediocre asset class.  If you were up a few percent and the market was flat then your are a relative hero. Does the client have enough money to retire after 15 years of investing?

I do not mean to put down portfolio managers but to really take advantage of things you had to be a market timer of sorts over the past decade. No, you did not have to buy and sell daily or even weekly. But cyclical moves must be timed, not matter what valuations say.

It is hard to believe it was 25 years ago today that the Crash of '87 sent the financial world into panic. Funny how there is always something out there to accomplish that same feat whether it be a tech bubble, housing bubble, debt bubble, tulip bubble or simple exuberance bubble that happened some eight years before Alan Greenspan made it irrational.

I was a green technical analyst; actually not yet an analyst at all since I had just started working with a financial information vendor only weeks earlier. I was also a kid who spent most of his young career peddling municipal bonds at Merrill Lynch. The novel "Bonfire of the Vanities" was also released that year and while I was not drinking magnums of Dom at Delmonico's, I was close to the whole 1980's style excess described in the book. I even held a check in my hand - for about 30 seconds - made out to a New York State municipal agency for $225 million after we underwrote a muni bond offering.

The crash rendered analysis of all kinds almost useless but after the volatility calmed down and the Earth actually kept spinning on its axis, analysis returned. I sort of feel the same way today as it seems that with QE out of the way the free market is trying to regain its power. Charts still need to be treated with salted kid gloves but we believe they are starting to regain our trust.
Posted by Michael Kahn at 11:15 AM No comments:

This time in video format. Enjoy!

Scroll down to the Oct 11 post where I threw down the gauntlet to Super Mario Draghi to save the market for the third time. Lo and behold (how regal!), Spain did it by proxy.
Posted by Michael Kahn at 4:17 PM No comments:

please ignore.  doing some testing
Posted by Michael Kahn at 8:29 PM No comments:

I touch on the timing of ECB and Fed intervention in my Barron's Online column today. It seems that they happened lately at the 50-day average and newly formed rising trendline from June. 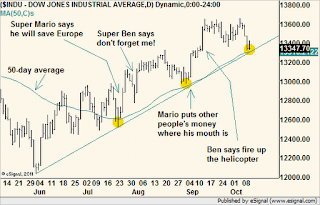 The problem is that both central banks have barely implemented their new plans let alone are ready for more. China and other central banks tried but they did not move this market.

So now what? Mario, it's your turn if the pattern is to continue. What's that? You are out of other people's money? Surely, Angela Merkel's welcome by Nazi garbed protesters in Greece will put everyone in a pocketbook opening mood.
Posted by Michael Kahn at 3:40 PM No comments:

I really don't have a ground breaking post for you after a week of having my daughter in the hospital (and wife staying with her - everyone came home today). But I do have something that just hit me this morning.

Pandora is on everyday as I work. Today, Pink Floyd's "Sheep" (from the Animals album, 1977) was on and the lyrics reminded me of the stock market. See if you agree.

Harmlessly passing your time in the grassland away;
Only dimly aware of a certain unease in the air.
You better watch out,
There may be dogs about
I've looked over Jordan, and I have seen
Things are not what they seem.
What do you get for pretending the danger's not real.
Meek and obedient you follow the leader

There are many visuals overlaying Fed meddling in the markets with the stock market itself. This is my favorite from a blog called Calculated risk. Here is the URL for this particular June 28 post - which I suppose I am re-blogging (like re-tweeting) http://www.calculatedriskblog.com/2012/06/qe-timeline.html. 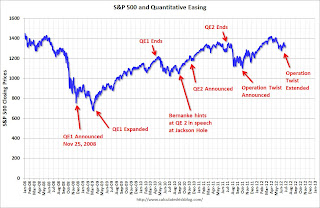 If you think the Fed printing money mattered (in a positive way) for the economy, I've got a bridge to sell you. But if you think it mattered to the stock market, here is your proof.

The Fed (and ECB) are out of goose juice. What do you think will happen now?
Posted by Michael Kahn at 3:03 PM No comments: 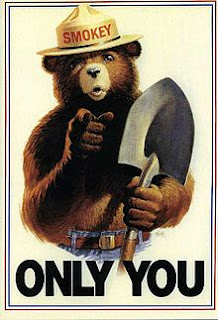 ...
...can prevent portfolio fires.  Ben is putting them out with gasoline, which, by the way, has made gasoline prices go up (among other reasons).

More unintended consequences from the government's misguided plan - persistently low interest rates is hurting savers (Ben wants everyone to buy risk assets). But it is also hurting Social Security, which is mandated to invest in Treasuries.