For those of you pop culture junkies, the headline is the short-version of today's message. Who knows this open from a 1960 TV show theme? (post your knowledge here)

It's about time, it's about space,
About two men in the strangest place.
Well, today's column was about time. Today's blog is about space. Men in strange places are up to you.

The market is now knocking on the ceiling for a breakout and that ceiling is fairly close to a 38.2% Fibo retracement of the decline. Something about the decline itself looks rather Elliott-esque. 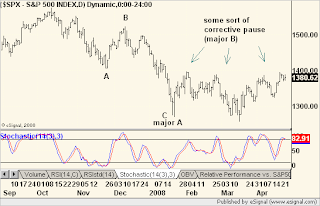 All of you Elliott wave propeller heads out there need to cut me some slack on this one. But I see a nice 3 waves down from the top in a 5-3-5 pattern. I know the breakdown is not right for an overall wave A down but the spirit of the pattern is on my side.

Next, the whole trading range smells of a corrective pause after the decline that will culminate into a vicious major C wave down from there.

Not going to speculate where that C begins - here or 5% higher. Can't give the store away on a blog.

So there you have it - time and space. If only we had smell-o-vision. Wouldn't it be great to be able to smell a sweet or stinky market?
Posted by Michael Kahn at 2:58 PM

ok, had to google the theme song, but I do recall the tune though I dont recall the show "Its About Time",.....anyway good adjunct to Barrons column.

ok, had to google the theme song, but I do recall the tune though I dont recall the show "Its About Time",.....anyway good adjunct to Barrons column.

Quote: Not going to speculate where that C begins - here or 5% higher. Can't give the store away on a blog.

Michael, you are just as good a marketer as you are a market technician. :-) Not knowing more about the "C wave down" wouldn't let me sleep, so I just purchased a monthly membership. I didn't see any automated revolving payment option. Will I get an advanced notice before my monthly subscription expires or do I need to keep the renewal date in mind?

Thank you in advance for your answer.

The show was also called "Its about time" with Imogene Coca. Astronauts somehow go back in to to live with cavemen. It beat the Geico inspired garbage in spades.

You definitely had a mis-spent youth. The bearish down-trend appears still unbroken. Will the market turn down from here?

Stronger USD pushing indices higher? Why on earth would that be the case? So far it's been the weakness in USD that kept the US economy and markets from a free fall: 1) export advantage 2) cuurency effect on earnings from abroad. If the USD keeps on gaining strength in this quarter then Q2 earnings won't be pretty.

Hmm, so the S&P broke its trading range to the upside today. It was a last minute call and today's trading wasn't all that convincing. But ... it did break up. I am wondering how religious we should be about it. Or - isn't the real test S&P value at 1406 points?

There are two schools of thought - Honor the price move and the rest (volume, momentum, etc) will follow or this is a sucker rally to get everyone excited before heading back down again.

As for the US dollar effect - a weak dollar was good for the economy and now a strong dollar is supposed to be good? Ask the media to make up its mind.

Your article said you expect bond yields to bottom within weeks. Does that mean you are expecting yields on the 10 yr treasury to exceed the current 3.9% or get smaller?

Yields bottoming means they are going higher. Prices are peaking and will go lower.