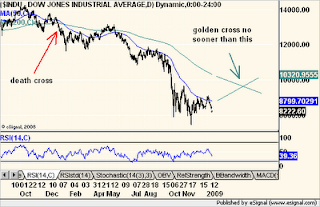 The question now is when will we see a golden cross? Of course, we cannot know that in advance but we can put a framework down to see where it might happen using non-crash conditions and non-we-just-bagged-Osama-and-solved-the-credit-crisis market melt-ups.

Using an aggressive plan for a rally over the next few months, that cross cannot happen for at least four months. And if the market putzes around for a while, that cross gets pushed out even farther into the future.

And if the market goes down to probe its old lows from November, push it out even farther - so far that we cannot even think about figuring out where. Why? Because the 50-day will get even farther below the 200-day, presenting even more ground to make up.

The point is that this system is not going to sound the "all clear" for quite some time. You may be able to pick some profits out of the market using short-term methods but long-term investors are going to have to wait.
Posted by Michael Kahn at 2:02 PM

I have recommended to my family and friends who do not follow the markets--but who do have 401ks and IRAs--that a simple tool to define cash (or short) vs. investing periods is the 13/34 EMA crossover on the weekly S&P500 chart. It got us out in late December 2007 and has kept us in cash since. Now if I had only left my QID position up for that last 13 months I'd be a lot better off than I am after trying to optimize. This past year has just been too damn hard for non-pros who can't watch the markets intraday...and even for those that do, I guess.

To short, or not to short? That is the question. Whether it be nobler to suffer the slings and arrows of outrageous bear traps, or to stand aside in cash--yet again--while new lows are made?

As a follow-up Michael, what's your take on the medium term at this point? Straight down to <741 or bounce and then down?

I'm a mid-term trader (I take macro positions based on weekly charts and mostly on stochastic 20 upward crosses (buy) and 80 downward crosses (sell) augmented by MACD and RSI divergences. Pretty standard stuff. Based on this methodoly. right now the weekly SP is still in a buy, but it's looking like it wants to roll over.

I've been in cash since Nov. 20 when I got bear trapped at SP 810. I went short after letting all the 849 stops get cleared out. The boys still scalped my stop an hour later on the way back up. I've been frozen since then.

the 13/34 parameter set seems to be more responsive. Did you get whipsawed in July 2006? That's when the 50/200 came within a fraction of signaling a sell.

I only act after COB on Friday and also use a (60,3,3) stochastic on the weekly that has to break 50 to confirm a crossover signal. These kept me out of a whipsaw by the skin of my teeth.

Bingo! I am also telling my clients that THE BEAR has at least 4-6 months of life, at a minimum and perhaps another 18 months.

There are superior indicators than the 50/200 X in my opinion however.

no doubt there are better indicators, especially when we consider how fast the early moves usually are. That's a lot of cash left on the table for a slow system like the 200/50.

but no one indicator should ever be used alone.


What do you use?