When the chips are down buy a railroad

This chart really does not need much in the way of captions. 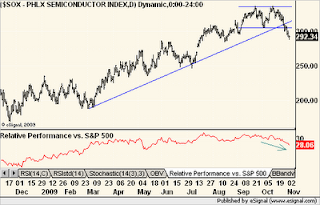 The key semiconductor index has very clearly broken down and is underperforming in a down market. That means it is falling more than the S&P 500 and that is not what happens in a bull market. So what does the Oracle do? 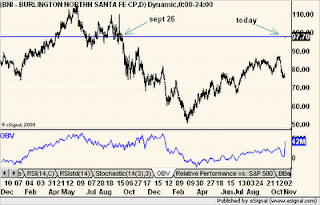 Why he plays monopoly and buys himself a railroad! You can make your own comments on why today and not a few months ago when he first started to talk up the economy. I smell Goldman Sachs.

The media made a big deal out of Buffet going "all in" on the economy with this move at this time at this price. Again, why wait until now when he was "all in" months ago? Is it really a bet on the economy? Maybe it was a patriotic move so that a key cog in the infrastructure does not fall into foreign hands thanks to the dollar.

Or was it financial engineering as he buys now and pays later with depreciated currency or assets? That's not a bet on the economy is it?

Who am I to question the wisdom of this move. He is the man, not me. What I question is the nonsense that he is betting on the economy. He is betting on Warren Buffet (I would too) and nothing more.
Posted by Michael Kahn at 1:06 PM

Warren is not a day trader nor a market timer. He is anticipating economic trends and looking for value within a long term time frame - not picking bottoms.

It was kind of amusing that the financial media treated this as some kind of near term buy signal for the US stock market, or as a confirmation that the US economy is officially out of the woods.

Mr. Buffett has vision and staying power, but he is not a market timer. He can afford to be very early because he has the financial resources to wait until his position makes money -- unlike many of us.

But the near term outlook for stocks is still very much up for grabs.