There's a corny title. It was even too corny to spring on my editor and let me tell you Barron's is not far from its new owner style on headlines (I am talking about Rupert).

Anyway, today's column was about the BRIC countries and how they have faded like some bric-a-brac on a long forgotten mantle. We are focused on the PIIGS but BRIC is in technicall7y bad shape, too. Fundamentally, can't argue but the charts have broken on three out of four.

You've seen the charts of Brazil, China and India in the columen. Check out this one of Spain (the S in PIIGS). 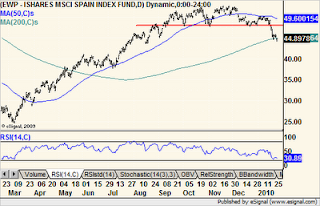 This is the Spain ETF and it is under its 200-day average. It is also under the neckline of an arguable double headed head-and-shoulders. Looks like it can bounce but it is narly - and not in a good surfer way.
Posted by Michael Kahn at 4:20 PM