While the LIBOR rate is still a far cry from its panicky 2008 levels, it has been on the move since the summer. 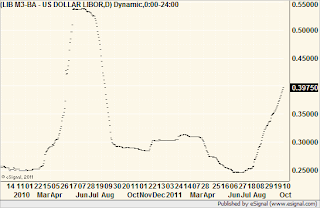 As you can see in the chart, it is still well below its 2010 peak but I am more interested in its change since the summer. LIBOR started to rally just when stocks started to fall. But unlike stocks, which bottomed in early August, LIBOR kept on going higher. It has increased EVERY DAY in August, September and so far in October except for two.

Just stuff that makes you think that while we, the public, is fooled by all the hope and mirrors coming out of the EU, perhaps the banks themselves know better.
Posted by Michael Kahn at 12:41 PM

Nice chart Mike. My sense is that there is a lot of stress in the financial sector that is just not on the radar of most equity investors... yet.