While many of my readers are saying "nuts" to me, I am saying the market is nuts again. Back in the good old tech bubble days, when I was putting out support and resistance levels on the major indices for BridgeNews (which kicked a$$, but the way) there basically was no resistance. Stocks were vertical. There was no reasonable place to say - oh, that is where supply will start to swell (resistance). No joke, I said out loud every day "this is nuts!" The market was nuts.

Well, it is nuts again. No, this is not sour grapes. I fully admit to being wrong for the past month and that was my fault. But now things are going nuts again. How many times have you seen a perfect, textbook, what we've been waiting for technical signal that not only failed at first but then went on to be absolutely correct after whipsawing you out? It is happening a lot right now.

Last week, I said in the newsletter that I had to buy something. I was so bearish for so long that I did not want to be blind to anything positive that might happen.

We bought BMC (software) on Wednesday. Why? It had a range breakout, was above the 50-day average, had good volume and recently broke a trendline to the upside. Not to mention the market was going up, too. 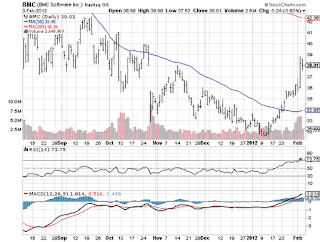 Look at this chart. On the day we bought it BMC promptly scored a bearish one-day reversal. OK, it happens. If they all worked I would be blogging from Virgin Gorda. Actually, I would be snorkeling, tanning and drinking, not necessarily all at the same time.

It did not hit our stop and the market was still strong to we gave it some rope. Thursday, it went up - a lot. Are real lot. WTFudge?

Talk about riding a bucking bronco! I was right, but not before I was wrong (did Mitt say that? Or was it John Kerry?). I can handle being wrong but I would not mind being in a little more control than that.