Musings on the Golden Cross

Over time, buying when the 50-day moving average crosses above the 200-day average has been a winning strategy. You do not buy the low and sell the high but you do usually get on the right side of the trend.

With a few exceptions, it really worked well for decades. Or should I say during secular bull markets?

The current secular bear has not been so nice for this strategy. And it was rather lousy in 2010 to the present. 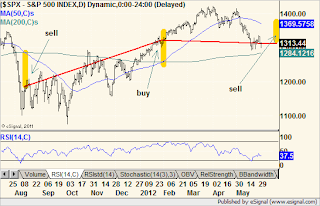 I projected the next cross to occur a month or two from now and it looks like you will sell at a loss, or breakeven at best if your bought the cross in January. And the same sort of thing happened before this chart in 2010.

What? Wasn't the golden cross in January a great buy signal? Well, yes it was if taken on its own. But what in this simple analysis told you when it was really time to sell instead of having to wait for the downside cross and a complete loss of profits?

I have not tested this over prior secular bulls and bears but it does show that something about the past few years sure does not lend itself to the tools of prior periods. I think these tools will once again start to work as intended but for now, caveat analyticum.
Posted by Michael Kahn at 1:48 PM