The Sprit of the Analysis

I often look at charts with my right brain to try to understand what they are really telling us. This is different from the left brain approach we all take as we mark up the price action with circles and arrows and a paragraph on the back of each one explaining what each one was (Alice's Restaurant fans, anyone?). Seriously, we look at a handful of indicators, draw trendlines as if they really mean something and then come to logical conclusions about the odds of the market going this way or that.

A few days ago, I was in a brief discussion with another member of one of the many chat lists I follow and he was talking about an inverted head-and-shoulders pattern on the banking ETF. 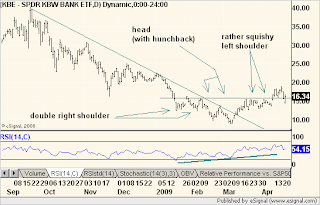 (errata - I labeled the shoulders backwards. Donations accepted for my rehabilitation)
Here are the items I want in my inverted head-and-shoulders pattern:
Double body parts are perfectly acceptable. The squishy right shoulder (labeled left) is also OK as it typically means that a trend change is going to be swift.

But proportion! The pattern length and height are in proportion to each other. It is not an exceptionally flat or tall pattern and it looks like what it is supposed to be. But look at the prices. The pattern, if measured from the middle of its height, is 65%.

Did anyone really think the "double top" in the S&P 500 at the March 2000 and October 2007 highs really was a valid pattern? A lot of people did and they sold the crap out of the market in late February when the 2003 low was taken out. That trade was big in numbers but not compared to what should have been according to the size of the"double top."

To me, that was a couple of bull and bear markets, not one pattern. And the same thing applies to the banking ETF. I am not saying it cannot or will not rally - a lot - but don't justify any targets with this pattern. Technical analysis on such volatility must be treated a lot differently. After all, aren't we saying that the current high VIX is distorting regular analysis? If so, then do not read too much into the bank ETF.
Posted by Michael Kahn at 2:00 PM