This morning, I caught the tail end of a segment on CNBC that perked up my ears. They were trying to debunk the feeling that the US dollar was going to heck in a hand basket. For proof, they and put up a chart that began at the end of the third quarter of last year and ended Sep 30 of this year. Exactly one year, quarter to quarter. The idea was to show that the dollar is not at new lows and by definition that means it has to have a positive rate of change from the actual lows to now.

Here is the current chart with Dave Landry's big blue line (that a 6-year old could draw on the chart with crayon). The trend is down - period. 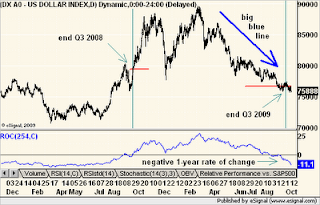 I am not saying it will crash or even stay at low levels. But do not try to spin this in your bubblevision way. The greenback is reeling. Calling a Q3 to Q3 comparison positive was not only incorrect but it was irresponsible.
Posted by Michael Kahn at 1:11 PM