While the remaining two AFC contenders prepare to do battle, fittingly in Heinz* field, this is a post about hamburgers and hot dogs. Tailgating at its best.

This is a chart of the livestock ETN, lovingly named COW, probably because they did not want to confuse it with PIIGS. 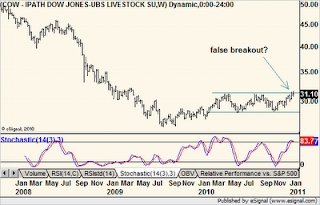 This ETN is based on Live Cattle and Lean Hogs futures (hence cows and pigs). It shows an attempt at breaking out from a large range that is so far unsuccessful. Short-term, the call might be for a drop back to the bottom of the range but let's keep it big picture. 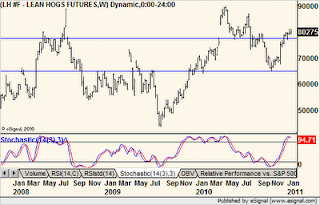 This next chart  shows the same time span for lean hogs with the warning that the contract rollover in livestock futures is funky. But basically, it looks like a breakout to me (with a short-term argument for a correction lower). 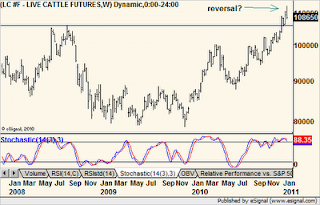 And finally the live cattle chart also shows a long-term breakout with possible reversal in play. What's a carnivore to do? Everything says long-term bull, if you'll excuse the expression, and short-term bear (I hear bear meat is greasy).

What is more interesting is how the COW ETN fell steadily in 2008 and 2009 and is now in a low level range while the futures on which it is based have rallied all the way back to previous highs.

My take is that livestock prices are rising but Wall Street once again has found a way to screw the public with this ETN. Who owned leveraged stock ETFs and watched them fall when stocks went up or down over time? (Yes, I know there is a daily reset). And what about the Oil ETN and the contango tango?

Get yourself a futures account and trade the real thing.

* Heinz is the giant maker of ketchup and other condiments
Posted by Michael Kahn at 11:09 AM