I Can Make it Say Whatever I Want

Don't you love data analysis? How about statistics? or (shudder) charting? And let's not forget the barrier to entry in the market analysis business (that would be none).

You read it here, folks, I can make a chart say whatever I want it to say if I torture the data long enough. Here is a chart I saw posted by a chart watching analyst. 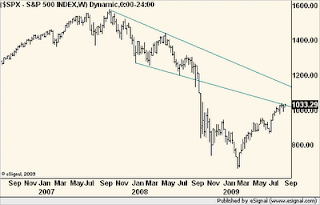 According to his analysis, the market is finally hitting a real resistance level. Real? Are you kidding? What makes this resistance? Where is the justification from a psychological point of view to make people want to sell stocks and raise supply of shares in the market?

"Regular" resistance, or horizontal resistance, arises from the market's memory. It was a price in the past that brought out the sellers, either because they thought it was expensive or it was a place they could get out at break-even after a lousy purchase decision.

To be fair, trendlines do persist and come back into play after the market leaves them. People can get it in their heads that prices change at a certain rate so they might view certain levels as attractive or unattractive over time.

But some random line drawn on a chart is not necessarily a trendline. Look at the next chart. 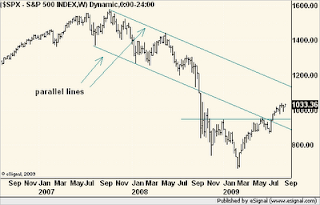 Here, I left the top line in place as both the other guy and I agree that it is a valid bear market trendline. But instead of cherry picking the bottom line I dropped a parallel down and lo and behold it hits the market four times! Three were bottoms and one was a top (in June).

Using this analysis, the market had a major breakout in July through "regular" resistance and the lower trend channel line. The target theoretically is the upper line.

All of this is great in markets gone by but after last year these sorts of simple chart scribblings don't have the same efficacy. Too many people are watching and the market is still too unstable with the three-month T-bill still down there near zero (0.135% as of the close today).

You know what is really scary? This analyst may turn out to be right but not for the reason he cited. That would be enough for unsuspecting investors to subscribe to his services and get turned into market chum next time around.
Posted by Michael Kahn at 4:03 PM

Very nice. Gotta say you pulled a chuckle out of me a couple times. I am market technician, though with only 6 years of amatuer (self taught) trading experience. But even with that, and no formal training, the first thing I know is that a trend is a trend until the trend changes. Kind of like saying an object in motion stays in motion until an outside force causes it to do something different. To the chagrin of bears, the best strategy has been buy the dip. And until that trend cracks, I (and I assume intelligent traders) will likely be doing the same.