I remember giving a speech to a technical analysis group in 2001 and a speaker before me was talking about a giant head-and-shoulders pattern where the 2000 peak was the head. I did not see the shoulders but I imagine the 1998 peak and the post 9/11 rally peak were supposed to be them.

But now, we have the same grizzlies looking at the giant double top and projecting a drop down to the same levels. Why not? Same peaks and same giant movement as before. 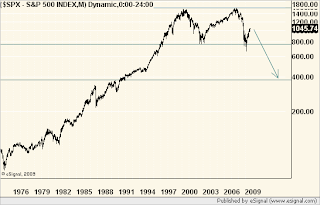 I do not use linear charts for downside projection. I use log scaling and that brings me to my worst case projection. Based on basic pattern measurements, I get about 400 as a low - and that is if the depression-meisters get their unfortunate way.

I have said all along - for the past year - literally - that we would undercut the November low (hello March) and then come back one more time to scare people without setting a new low. Under this scenario, we get a nice base and the giant decade long trading range can continue with the next mega bull market - that will not set a significantly higher high.

Yes, I wildly underestimated the current rally. Let's get over that already.
Posted by Michael Kahn at 10:35 PM