This is the chart subscribers saw a few weeks ago and Barron's Online readers saw, albeit with some of the markings removed, in today's column. 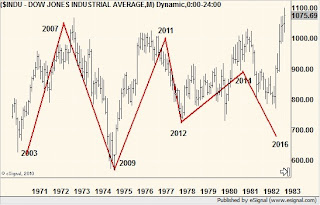 I do believe that there is an 18 or so year cycle of secular bull and secular bear markets. The current secular bear started at the 2000 peak. This chart shows where most of the cyclical bull and bears fall within.