Colleague Dave Calloway, Editor of MarketWatch.com, called it "In-Thain" that Merrill Lynch wanted to sell its stake in Bloomberg. That's right, John Thain, the CEO, wants to sell of the piece that is actually making money. Hey, isn't that how they created CDOs in the first place? Package the non-performing loans into a new security and sell them to the unwitting public! Genius!

Now we read that Mother Merrill's CEO is the highest paid US CEO with 2007 compensation over 83 MILLION DOLLARS!. Depreciated currency or not, that is a lot of cash.

Now, let's see if he deserved it. 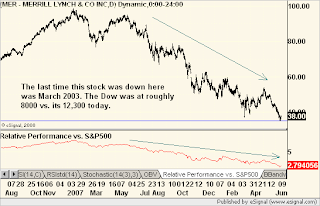 Sorry, Charlie, I mean Johnny. This chart of your company as it heads into the toilet says you should be sued to give it back to shareholders and the employees you have and will lay off because of your greed and shortsightedness.

Is it any wonder I am advising clients to avoid stocks like these? Low priced does not mean cheap. But then again, there is absolute support on the charts at zero.
Posted by Michael Kahn at 8:52 PM

Even the executives that make money for shareholders aren't worth their pay packages. This is a travesty that institutional share holders have no incentive to fix.