Remember back to the good ole days of 2007 when the worlds coffers were overflowing with the sweet fruits of the ATM? You know - refinance your mortgage and take cash out. And for the big boyz and girlz, sell bonds in Japan and put the money to work anywhere else in the world. Ah, the yen carry trade (said looking skyward with longing eyes).

When the yen started to rally, the ATM closed for biz. The world lost its liquidity pump and wouldn't you know it, the mortgage crisis - kindling in the desert - ignited.

Well, check out this chart of the yen. Just when you thought the world was about to seize up we get this gift. No, I don't think that housing will come back because the yen dropped and Japan kept its short rates at a whopping one half percent. I'm just sayin'. 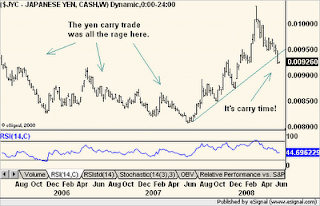 I don't think we're going to crash, at least not yet. Rather, I prefer to think of a regular ole bear market in stocks that grinds us down, makes fools out of the "stay the course, buy the dip" crowd and vindicates those of us who have been jumping up and down about it (yes, some prematurely).

Bonds falling, commodities rising until finally the global economic engine chokes. Can you say "inflation." I knew that you could (any Mister Rogers fans?) I just hope it chokes sooner rather than later - before a good chunk of the world starves.
Posted by Michael Kahn at 8:03 PM