I am no Elliotician but I am now looking for that most scary of waves - the "C." Thursday was a killer for the bears but perhaps that was its function. As I wrote in my column Wednesday, there were just too many bears out in retail-land and the market does not like consensus.

Here's the way I see it on the chart and believe me it is open for discussion as I am sure I violated some rules.

The rally ended in October and the decline into January was a nice "A" wave and first leg of the correction (a.k.a. - bear market).

Whatever we saw from January through May was the "B" wave higher, which essentially corrected the first correction.

How do I know this? [Warning - Jargon Alert!!!] Like I said, I am not Elliott Wave expert but the decline from October unfolded in five wave and the rally through May was arguably three waves - just like a nice zig-zag correction should be. I say arguably because it was far from a textbook look but as colleague and wave expert Steve Poser said, if you can't figure out how to label it then it's not an impulse wave.

That leaves us with the current decline now just getting underway. Oh, and "C" waves are usually not very gentle. 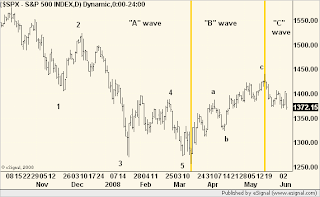 Here's is how I justify this week's action: The only conclusion is that the bearish sentiment we’ve seen (very high percentage of bears in the AAII survey) was kindling for the rally and once the public says that things are not so bad anymore (as they did yesterday when the media was full of reports that the economic data is a lot better than anyone expected) the market will continue with its unfinished business of revisiting its March lows. Of that I am confident.

Now with the economic data worse then expected, all of the sudden, high oil and low jobs matter. They always matter. It's just a matter of time.

In the coming week, we'll have some better if-then forecasts for subscribers with an eye on what to do if and when the March lows are reached.
Posted by Michael Kahn at 2:09 PM

The "C" should go down into October. I see 1230 as the bullish scenario and 1160 as a not so bullish scenario. Of course, it goes where it wants to without my permission. It is debatable whethere the "C" wave has started yet - but it is possible.